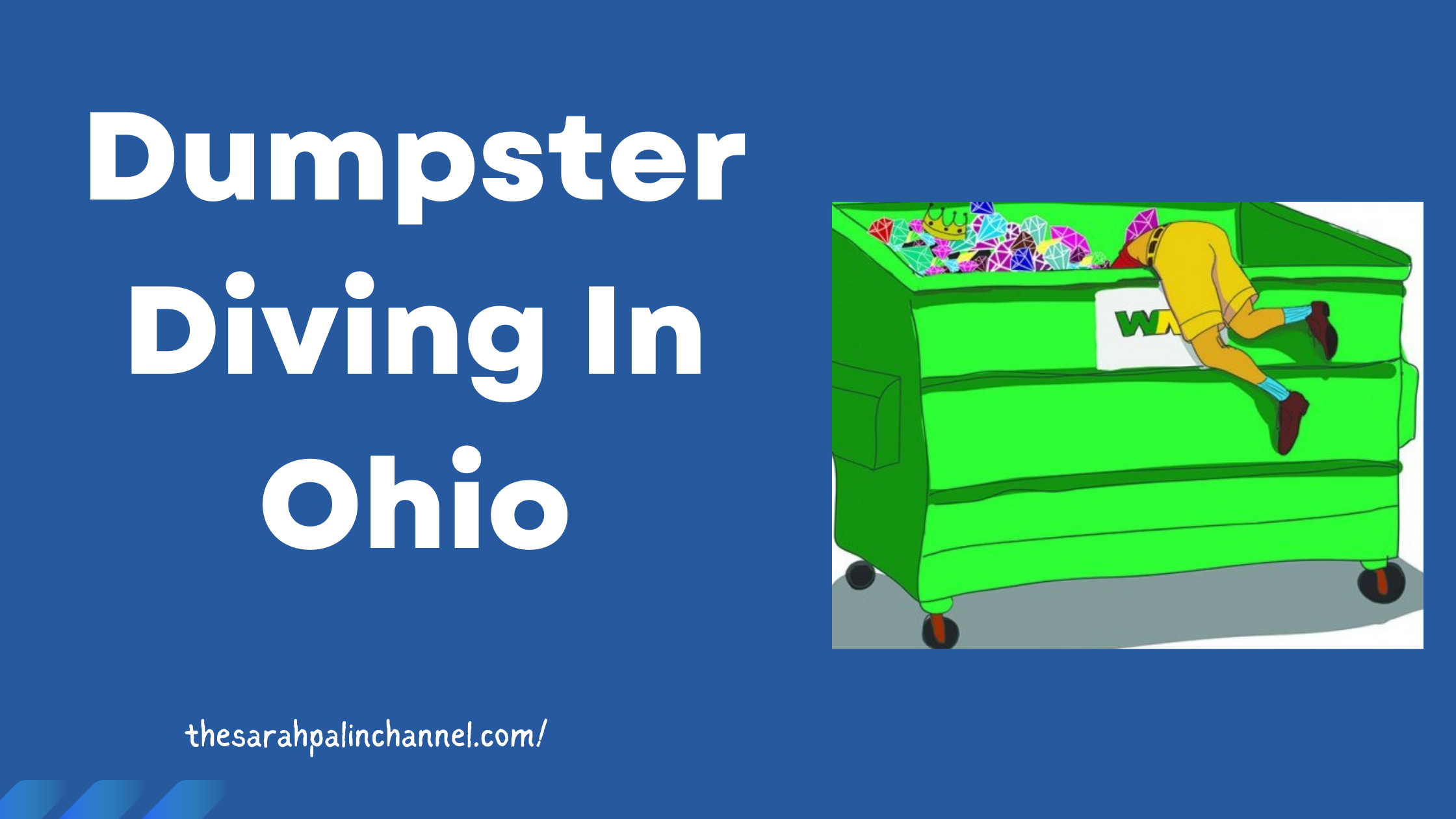 Are you nursing the idea of going trash diving in the state of Ohio and you’ve got no information on how to go about it?

Worry no more as the solution to your worries is here because we aim this post at enlightening anyone who wants to make extra cash through garbage diving.

Where Can I Trash Dive In Ohio?

There are 272 shopping malls in the state of Ohio housing 7737 stores, and that shows you’ve got many options whenever you want to go bin diving in cities like Cleveland, Toledo, Cincinnati, and Columbus.

Ohio is fast becoming a popular dumpster site due to its laws bar some cities.

Is Dumpster Diving Legal In Ohio?

Dumpster Diving is legal in Ohio, but all cities do not operate under the same guidelines, which means the law may differ according to location or city.

A dumpster diver should be aware of the municipal code, conduct code, and local ordinances before going out to pick up items on dumping sites.

A bin diver should be in possession of the appropriate permits and licenses to avoid issues with enforcement officers and fellow citizens.

However, the law that guides and strengthens a dumpster’s resolve is the United States Supreme Court case California v. Greenwood, which stated that a person or organization has effectively relinquished ownership rights to any waste deposited in public dumpsters across the country.

Is Dumpster Diving Legal in Zanesville?

Zanesville actually has some pretty clear guidelines as far as dumpster diving goes. The municipal code states that “Once your recyclable material is placed on your curb line or alley collection site, it becomes the property of the City of Zanesville, Ohio.

No one is allowed to collect it except the city sanitation employee. They will give anyone taking recyclables a citation for the theft of city property”.

Is Dumpster Diving Illegal In Columbus?

In Columbus, dump diving is legal if it follows the code of ordinance. The Columbus code of ordinance states ‌it is illegal to remove any waste that is put out for collection unless a person gets permission from the rightful owner before removing the waste from the property.

Is Dumpster Diving Allowed In Cleveland?

Dumpster diving is not totally illegal in the city of Cleveland. Although, the only issue with it is the Cleveland code of ordinance 551.081, which prohibits the scavenging of recyclable materials.

And also, the Cleveland code of ordinance 551.082, which states that the scavenging of solid waste materials is illegal between 8:00 pm and 7:00 am or from sunset till 7:00 am if sunset should come before 8 pm.

Is Dumpster Diving Legal in Toledo?

In Toledo, there is a strict law that prohibits anyone from picking an item from any bin that has been set out for collection.

Is Dumpster Diving Allowed At Night In Ohio?

This is a question that has no definite answer, as laws differ from one place to another. Some states allow it while others are totally against it.

If you are fortunate to be in a state that gives room for garbage scavenging at night, ‌go out with the right permits and licenses the authorities have given to you.

What Are The Laws Guiding Dump Diving In Ohio?

The Federal Law on Dumpster Diving, which stated in the 1988 case of California v Greenwood that any set out for disposal is free for all, is one of the laws, guiding dump diving in the state of Ohio.

Others are the local ordinances of various cities and the Ohio law on dumpster diving, which made it legal to practice.

What Are The Penalties For Dump Diving In Ohio?

They listed the Penalties that come with breaking the laws guiding dump diving in Ohio below;

In Ohio, this is considered a serious criminal offense and could be considered a fourth-degree misdemeanor if a diver is to be convicted.

They will charge any dumpster diver caught disturbing the public with a fourth-degree misdemeanor with jail time or fines in the range of $150 and $1000.

Under the Ohio revised code 2913.01, theft is classified but not limited to forgery, credit card fraud, computer hacking, deception, and withholding property belonging to another.

Vandalism lesser than $75,000 will result in a diver being charged with a fifth-degree felony, and could face five years of probation with six to twelve- months of jail time or $2500 in fines.

A higher penalty awaits the bin diver if the damage done is more than $75,000.

In Ohio, the law defines litter as any trash that is thrown, discarded, or dropped onto public or private property that is not owned by the individual. It is also against the law in Ohio to throw litter into the waterways.

If you’re caught littering, you could get sixty days in jail and you will be facing fines up to $500.00.

What Are The Rules For Bin Diving In Ohio?

In Areas where garbage diving is legal, there are rules you should follow as a diver.

If there are ‘No Trespassing’ signs or notices of private property, then it is considered illegal to dumpster dive in that area.

You will also be breaking additional laws if you disobey the signs.

There might be a time when you encounter a dumpster that is ‌behind a locked gate or fence. Don’t break the lock and trespass into the area.

This is because that is against the law and you could set yourself up for expensive consequences.

If you’re asked to leave the premises, no matter if it’s the property owner or law enforcement, respect their wish.

Moreso, after cleaning up after yourself, respectfully leave the premises.

How Much Can I Make Through Trash Diving In Ohio?

Several factors determine the amount of money you can make dumpster diving in Ohio.

Some people go dumpster diving solely to find recyclable items to sell and profit from. Others may want to start garbage diving to get food or groceries for personal consumption.

Many dumpster divers look for electronics, furniture, and books to sell on eBay or Facebook Marketplace.

Garbage diving will be difficult to sustain as a full-time job in Ohio. This is because you will need to devote the whole time to it.

Dump diving in Ohio is not as hard as first thought if the right information is with you, alongside the appropriate permits and licenses.

Once you have that, make sure to always follow the laws of the state and the cities in which you plan to dump dive in.